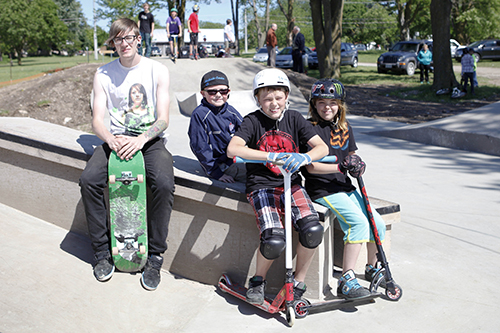 A journey of a thousand miles begins with a single step, and sometimes a seemingly impossible fundraising effort just needs its first believer.

The Stratford Perth Community Foundation believed in the St. Marys Skate Park. The AIA High Fives for Kids Foundation and Community Fund combined forces to provide the first $2,200 in seed funding that ultimately led to tens of thousands in infrastructure investment.

Youth on wheels of all description are expected to use the park, which will welcome bikes, blades and skate boards to explore its amazing recreational possibilities. Councillor Carey Pope was charged with realizing the vision, and launched a YouTube campaign to engage the community.

Local businesses, parents, youth and community members came together to secure funding. They were initially encouraged to apply to the Ontario Trillium Foundation, but the process at first felt overwhelming. Instead, they began seeking a more modest investment to see if others believed in their vision.

“The Community Foundation believed in what we were doing”, said Councillor Pope, “and that gave us confidence that what we were doing mattered.” The flexibility of these initial funds was also important. Pope commented, “Knowing the funds would be there for us when we were ready was important for the team as we built momentum for the project.”

By listening to the youth of their community, St. Marys has created a recreation space for safe connection and physical engagement. The Stratford Perth Community Foundation is proud to have believed from the beginning.